Today, we are excited to officially announce Extism, the universal plug-in system. Over the past few months, we have focused on building an embeddable, safe, performant runtime that is as easy to use from as many programs as possible. Extism brings extensibility to software of all shapes and sizes in a way which we believe to have been previously unacheivable.

Extism's goal is simple: make all software programmable. We've released the project under the permissive BSD-3 license, and you can see all of its components on GitHub. 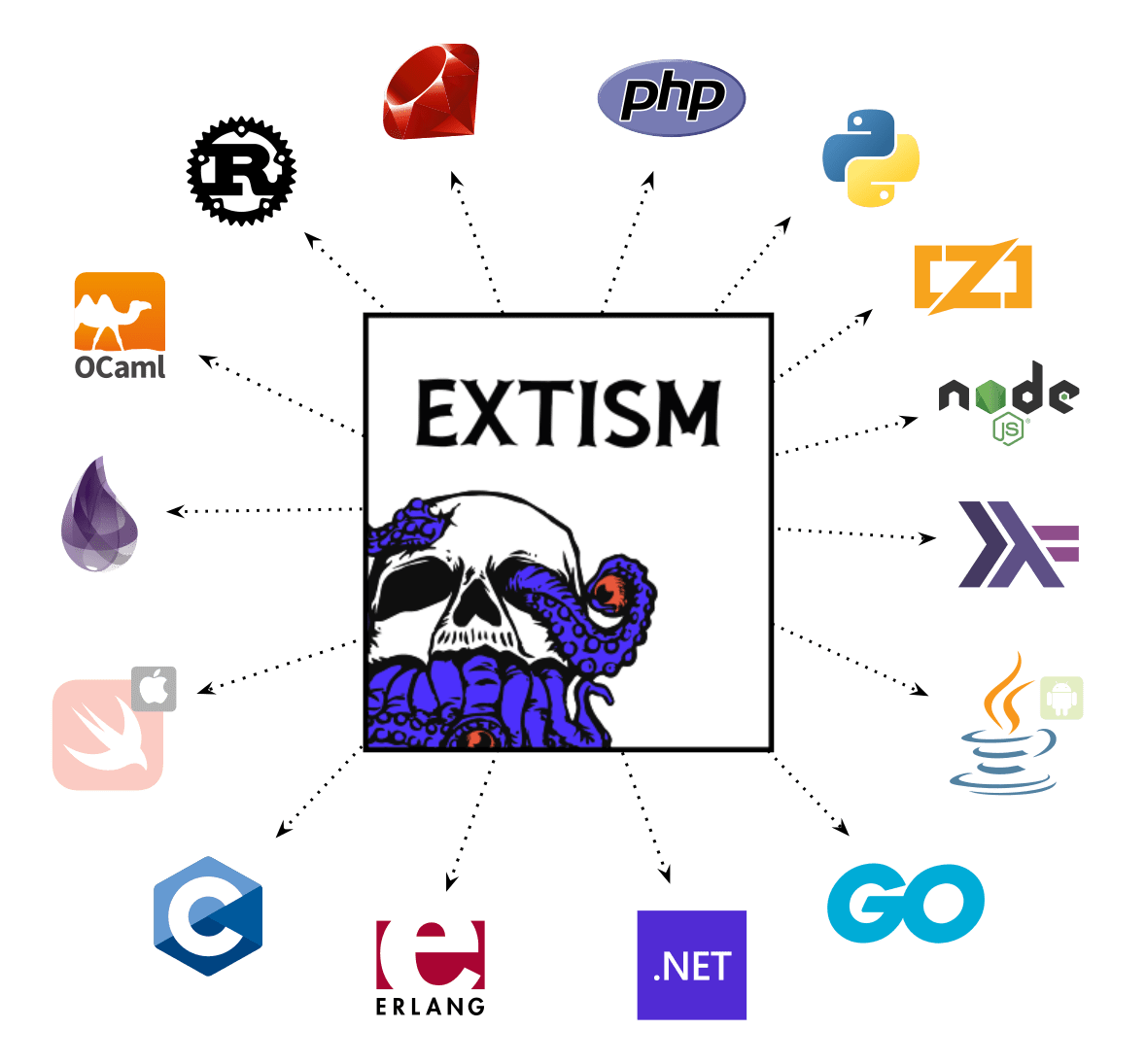 The power of a plug-in system is that it enables software end-users to dream up new capabilities and functionality of a program, which the original authors couldn't foresee, or didn't want to add to the core of a product. Keeping programs as simple as possible often leads to higher quality, better performance, and easier maintainability. It's important to us that software creators using any language have the same opportunity to have these benefits, and also be able to give their users rich extensibility.

As of today, Extism can be easily embedded into 13+ languages, using our official SDKs:

Embed Extism into any of your projects: web apps (using our browser runtime), databases, API servers, command-line apps, smart TVs, IoT, SaaS... you name it! Extism meets your code wherever it's at.

Extism, at its core, is a code runtime built in Rust. Underneath the hood, we run WebAssembly code as the plug-in execution format. This makes it safe to execute untrusted, 3rd party plug-in code even while it's directly embedded within the same OS process as your program. WebAssembly has a battle-tested sandbox isolation architecture, and is in use across the software industry from browsers, edge platforms, cloud environments, and more. In addition to its security benefits, WebAssembly is a compilation target that is already supported by many different programming languages. This enables plug-in authors to use the language that they prefer to write their plug-in, and as of today, Extism plug-ins can be written in 5 languages, using our official plug-in development kits (PDKs):

We plan to add more language support to our SDKs and PDKs over the coming months & years, so if you don't see your favorite language listed above, please join our Discord or file and issue and we can prioritize it or help you contribute!

How We Built It​

Staying true to our goal to make all software programmable, we knew Extism would need to be embedded into several languages. It needs to be able to go anywhere. Other projects with similar goals like sqlite or openssl, are low-level system components exposed to a multitude of language environments through FFI, the foreign function interface. Extism is no different. Choosing Rust was an obvious choice to help build a reliable and performance-sensitive core runtime, and with Rust's fantastic FFI support, we could expose runtime APIs which can be called from almost any language used today.

All of our official SDKs provide idiomatic wrappers over bindings to Extism, so users will feel right at home working within a language they know and love.

The runtime is only half of the equation though. What about plug-in authors? What kind of features and functionality should they get from the runtime? How do we expose these features to the plug-in environment? This is where WebAssembly really shines. Providing a standard ABI to WebAssembly modules is very straightforward thanks to its simple import/export architecture. Extism defines a set of functions which are linked from the host runtime to the .wasm module when it is instantiated, and our PDKs provide idiomatic wrappers over bindings to these native functions. From a .wasm module's perspective, these functions are "imports", provided to it from its host. Some of these include the ability for plug-ins to make network calls via HTTP, persist variables in between plug-in invocations, read host configuration data, and most importantly read & write complex data between the host and plug-in.

In addition to the imports provided by Extism, a host can elect to enable WASI and offer plug-ins a rich POSIX-like system interface, which allows many existing codebases and libraries to be compiled to .wasm modules and used within a plug-in. It's important to keep safety and security in mind, and as such, we've decided to hold off on enabling direct disk/filesystem access from plug-ins, and instead opt for a more explicit requirement to pass file data in and out of a plug-in directly. We're experimenting with approaches here and would appreciate your feedback.

As a fully open-source project, we also invite you to head to our GitHub repository and see how everything works. In the main repository, you will find all of the runtime code as well as each of the host SDKs. Each PDK is split into its own repository within the Extism GitHub Organization.

For a quick glance at some simple examples, see below:

Over the coming weeks and months, we plan on working with interested users and incorporating feedback, adding more language support wherever possible, and expanding our documentation and demos for users to learn from. Your input is critical and always appreciated, so please join us on Discord where we hang out and chat. Use each repository's issue tracker to file any experience report or bug you encounter. No feedback is too small, and we thank you for the time it takes to help us make Extism as great as it can be!